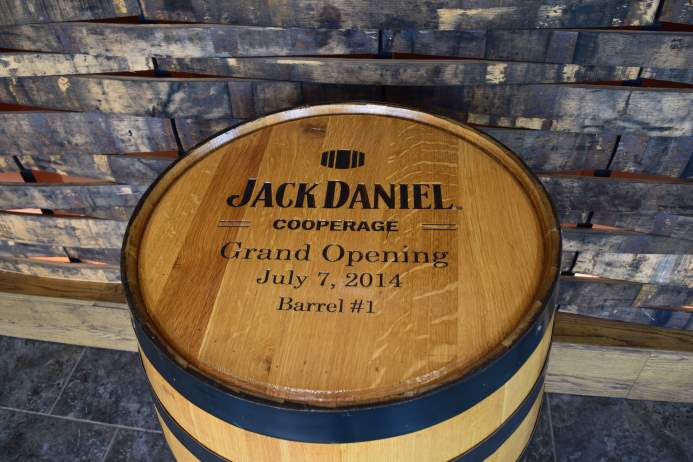 The Plant Manager, Darrell, gave us an introductory briefing, and showed us a short video that provided a good overview of the role the cooperage plays in the production of Jack Daniels Tennessee Whiskey, and the basic steps in barrel making. Bryon, one of the Team Leaders, then took us on a guided tour of the plant. He showed us every step in the process, except for the toasting process, which is proprietary and protected from prying eyes. Both men were gracious and extremely informative. It was also evident that both men were extremely proud of their plant and its role in producing Jack Daniels Tennessee Whiskey.

We were very fortunate to be able to tour the plant. Unlike the distillery in Lynchburg, Tennessee, the cooperage is not open to the general public for tours. Our group was allowed to tour the plant due to our role in providing the white oak timber the plant uses to make the barrels.

Role of the Barrel in Making Whiskey

Aging whiskey in new charred oak barrels is what turns the clear, raw alcohol that comes out of the still, with all its rough edges, into the amber colored smooth tasting drink we love. In fact, many people believe the barrel is the most important ingredient in making American whiskeys. One caveat however, when talking about Tennessee Whiskey, such as Jack Daniels. In Tennessee, they believe, and in my opinion rightfully so, in the value of the Lincoln County Process in making smooth sipping Tennessee Whiskey. Nevertheless, the barrel adds one hundred percent of the color to whiskey, and the majority, perhaps as much as eighty percent, of the flavor. In other words, without aging the alcohol in a charred oak barrel you wouldn’t have whiskey, you’d have a liquid commonly known as White Dog.

Sitting in the warehouse, known as a rickhouse in the whiskey industry, the barrels and their contents, are subjected changes in weather. It is these seasonal changes, with alternating cooling and warming periods that drive the whiskey into and out of the wooden staves of the barrels. Sometimes the whiskey seeps all the way out leaving marks on the sides of the barrel and giving the angels their share. However, typically, the whiskey only moves part way into the wood leaving a discernible “whiskey line”, as shown in this photo of a stave from a used whiskey barrel. As the whiskey moves in and out, it leaves behind undesirable flavors and picks up good tasting flavors such as vanilla and caramel. I’ll cover the miracle of barrel maturation in a future blog post.

A standard 53 gallon whiskey barrel produced at this cooperage is a rather simple object. They consist of only a few major components; two barrel heads, 31 to 33 staves, and six steel hoops. One stave has a bunghole, into which a maple bung is hammered once the barrel is filled with raw whiskey. In a bit of an unusual twist the Brown-Forman Cooperages use especially marked rivets to identify its barrels. Each rivet head on a Jack Daniels Cooperage barrel is marked with a “J”. Barrels from the Brown-Forman Cooperage are marked with a “B”.

These steps are mostly in order, as performed at the Jack Daniels Cooperage. Most steps are accomplished sequentially, in a serial fashion, but some are performed in parallel.

The first step is to season the raw staves the plant receives from the stave factory. The staves are stored outside in large stacks for up to nine months. This ensures that the staves are dry and free from sap which would impart an unpleasant taste to the whiskey. The seasoned unfinished staves are brought inside the cooperage and milled either into barrel staves or pieces for the barrel heads. During this process, the staves are repeatedly inspected throughout the milling process to reject any stave that would result in a leaky barrel.

Once the head is formed one side is charred in a special oven. In a separate part of the cooperage, raw steel coil is cut to size, shaped into hoops, and riveted to form the hoops. The milled staves are brought to a barrel raiser, the worker who will build the barrel. The raiser selects each stave and places them, two by two, into the barrel making jig. (see photo). The last stave is the most important. It must fit snugly to prevent leakage, but cannot be too tight which would result in an oversized barrel which would cause storage problems in the rickhouse. The raiser places temporary bands around the top and bottom of the barrel. At this point, only the staves at the bottom of the barrel touch each other. The staves must be steamed to allow them to be bent into the full barrel shape and to prevent microscopic cracks from forming which would result in leaks.

Once the staves are steamed, the top of the barrel is bent into shape, and secured with a temporary band. At this point, the incomplete barrel has that familiar barrel shape, but is open at top and bottom, and no permanent hoops have yet been applied. It is now time to run the barrel through the toaster. The Jack Daniels Cooperage uses a proprietary toasting process that, they say, increases the barrel’s impact on the flavor of the whiskey during aging. During toasting the barrel is slowly and carefully heated over an extended period of time. This ensures the barrel doesn’t catch fire – that will come later. Toasting permanently sets the bend into the staves, and produces a compound called lignin that helps to flavor the whiskey. According to Jack Daniels, the deeper the toast, the more flavors the whiskey can extract from the wood.

After toasting, the barrel moves on to the char station. The barrels are placed over a gas flame that heats the inside of the barrel to over 1500oF. After burning for about 13 seconds the barrels move over a water jet that extinguishes the flames. This results in the optimal layer of carbon, and the “red layer” just below the char, which combine to produce all of the color and most of the flavor you enjoy when sipping Jack Daniels.

Once charred, the barrels move to the Cozier machine which shaves the barrel staves to the correct length. An angled groove, called a chime, is then cut into the top and bottom edges of the barrel into which the heads are then set. At this point the first two permanent hoops are applied, one at each end of the barrel. The remaining four hoops, the quarter and bilge hoops, are now applied. The worker at the next workstation drills the bunghole and inserts a temporary rubber plug. He then injects a few gallons of water and air pressure into the barrel to test for water tightness. If all is well the barrel, still with the temporary bung and water, is loaded onto a truck for shipment to the Jack Daniels Distillery where it is filled with about 53 gallons of raw Jack Daniels whiskey and laid to age in one of their many rickhouses.

My visit to the Jack Daniels Cooperage has given me new insights into the importance of the barrel aging process in making American whiskey, especially Jack Daniels Tennessee Whiskey. I am grateful to Brown-Forman and the Alabama Forest Owners’ Association for arranging this tour for those of us who attended the association’s recent annual conference at Joe Wheeler State Park in Rogersville, AL.